I had a strange experience the other day. I saw a picture of people in a crowded restaurant and I got a bit concerned. My first instinctive reaction was, ‘Oh,they’re sitting rather close’. And then I realised that this was the world before Covid 19. When we went out to restaurants and sat near other people and brushed past people at functions and didn’t think anything of it. When we hugged our friends and shook hands with strangers we’d just met. That other world. Was it really only a few weeks ago? It seems a lifetime ago. Everything that we knew and took for granted came to an abrupt halt and we were forced to adapt to new realities. What is going on? We are reeling with confusion at how the world changed so utterly without any notice.

Whatever one’s particular reality is, many people are struggling and in a way that’s normal. It’s because we’re having to cope with loss: Loss of jobs and income, of freedom, of security, of human contact, loss of a life once lived, loss of a world as we knew it. So, it is normal to feel lost, depressed and  anxious. However, as I have said to you  before, we ALWAYS have a choice of how to react. We have a choice of what we are going to do with all those negative feelings we have. Do we accept them, process them fully and then use them to propel us out of this darkness, or do we allow them to overwhelm us fully and take control of us? Because remember that as bad as things are now, it is not the first time the world has had to deal with calamity and dark times. Better times did come, there was joy again, and hope and victory. And it will happen again. And then you’ll look back at your despair and say, ‘if only I’d known that things will get better, I wouldn’t have been in such despair’. Hasn’t that happened to you before? It’s happened to most of us.

Besides the damage it does to us, negative emotions have a way of making everything worse.  I’ve told you before of the power of our thoughts and our imaginations. Have a look at my previous blogs on my website. We can make ourselves sick with our own minds. We can generate misfortune and disease by obsessing about it. Imagine the impact of an entire world all panicking and anxious at the same time?? It’s a recipe for …..even more disaster. There’s no denying the world is in a bad place, but mass anxiety will just make things worse.

So …stop. Breathe. Calm down. The only way we are going to beat this is to stop all the mass panic and fear. I know it’s not easy, but recognising it is the first step. And then we can slowly start unpacking it and resolving it.

In the same way that we can all panic en masse, we can all do the opposite. Perhaps it is time to develop an alternative global mindset – of faith, hope and courage. Yes we are all affected differently, but this virus takes no prisoners. It does not discriminate between class, race and creed. Everyone is affected in some way or the other. So we can all come together in our response as well. Imagine if we all chose faith over despair, courage over fear and hope over hopelessness? Imagine the huge swell of good energy that will infuse the world and the positive change that will occur. It might not happen all at once or immediately, but believe me – It will happen. 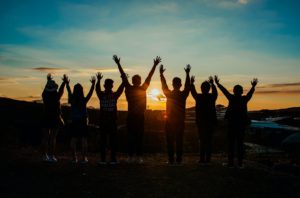 We could begin now to create the best chapter in the human story. It could be said of us in the future, that faced with a viral catastrophe, we did something amazing. Tragic times call for extraordinary qualities.

I read an article by Ben Okri last week , where he was saying something similar about the need to take positive action. I’d like to  quote his words as they are so apt:  He said ‘ The real tragedy would be if we came through this pandemic without changing for the better. It would be as if all those deaths, all that suffering meant nothing’.

Having said all this, I get that it’s easier said than done. That when you are in the depths of depression or anxiety, it’s very hard to overcome it without help. Well, help is available. Mental health professionals and life coaches have never been needed as much as they are now and thankfully our services are as effective online as they are in person. I am here to help you. Also check out my videos on my Youtube channel.